Update 2017-12-08 — A German version of this timeline has been published in Einführung in die arabische Grammatiktradition by Frank Weigelt (Harrowitz, 2017). See the list of publications.

Sometimes, when reading about the classical Arabic grammarians, I find it difficult to visualize the actual time span between different authors. Years are of course always mentioned in the literature, but it is often still hard to get a feel for how big a chunk of time there is between a series of events. To get a better sense of the stages of development of Arabic grammar I have made a graphical Timeline of Arab grammarians and their major works. It is based on The Arabic Linguistic Tradition by Bohas et al. (2006), and lists all grammarians mentioned in their book, and uses their division into periods. A pdf with the timeline can be viewed/downloaded here. 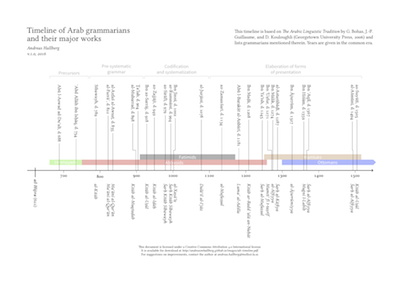 The LaTeX source code can be found here. I plan on also making an Arabic version of this timeline at some point.

Thanks to Georges Bohas for his comments, suggestions and corrections.