The Arabic textbook Alif Baa (Georgetown University Press, 2014), the introductory book in the popular Al-Kitaab series, lacks a good overview of the Arabic alphabet and how letters connect. (The table on pages 11–12 only shows the isolated forms.) I therefore deviced an overview of the alphabet of the type found for example in Schulz et al. (2000, a.k.a “the red book”) in which all four forms of each letter are shown. This fits neatly on one page, so I populated the second with letters not traditionally part of the alphabet but that nevertheless need to be learned by students (أ إ ؤ ئ ء آ ة and ي), as well as the system of vowel markers. I also crammed in some (I hope useful) information in sidenotes. The intention is for students to have this document at hand as a reference sheet for the entirety their introductory course.

The document can be downloaded here. 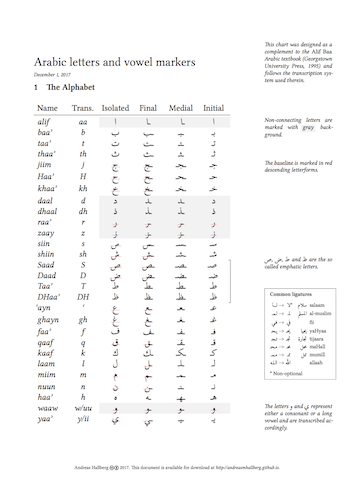 The fonts used in the document are Linux Libertine for the Latin script and Scheherazade for the Arabic, with Amiri in the ligatures infobox. The overly engineered LaTeX source code can be found here.