I often write documents, such as exams and lecture notes, that contain both Latin and Arabic script, often on the same line of text. This can be challenging due to the complications of mixing of LTR (left-to-right) and RTL (right-to-left) scripts. This seems like an easy problem to solve for software developers, and it is, only not in software with graphical WYSIWYG interfaces, such as Word or OpenOffice. (I’m sure everyone who has tried writing mixed direction text in such software share my frustration with them, and I will therefore refrain from rants.) Since my shift to exclusively producing and editing text in plain text formats (.txt, .mkd, .tex, etc.) with the editor Vim, writing texts with mixed directionality has become a lot easier. This post is an attempt to explain how.

This post only deals with the Vim side of things. The correct rendering of Arabic text also depends on the terminal in which you are running Vim. Not all terminals can display Arabic text correctly. For example, I use a Mac, and the terminal it ships with (Terminal.app) cannot connect letters. I run Vim in either in ITerm2 or MacVim, both of which display the characters correctly.

When typing and editing text on computer, switching from working with Latin script to Arabic script at the most basic level involves changing two things: a) the direction in which characters appear on the screen, and b) the keyboard layout that is used to insert characters in the text. In Vim, each of these two changes is done independently of one another with the options rightleft for directionality and keymap for the keyboard layout.

It is important to understand that text is stored electronically as series of characters, including spaces and line breaks, ordered one after another in a long list. Think of this as a list of all keystrokes used to produce the text. Arabic characters come encoded with information that they are to be displayed LTR, but it doesn’t effect the order in which they are electronically stored. Thus, if I type hello, the letters are stored in that particular order, and it can be displayed as LTR (hello) or as RTL (olleh) with without changing the logical order in which they are stored, only the direction in which they are displayed on the screen has changed. If I type the letters م ر ح ب ا, they can be displayed as LTR (ابحرم) or as RTL (مرحبا) with the characters in same order but with different direction of display. For Arabic, the latter is of course appropriate.

Now, what WYSIWYG (What You See Is What You Get) word processors such as Word or OpenOffice do is that when they come across characters in the file that are part of an RTL alphabet, such as Arabic characters, they rearranges them so that they are displayed RTL on the screen. This is of course nice in that it shows the text as it is intended to be read by humans. However, try to highlight a portion of a text with mixed directionality (or even with only RTL) with the mouse, add a comma at a direction switch, or enclose a section in parenthesis, and you are likely to run into trouble. Editing a text displayed like this is a pain. 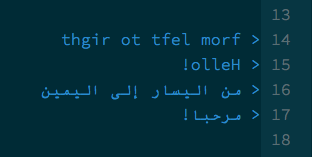 You switch between these two ways of displaying a text with :set rightleft for RTL :set norightleft for LTR. I have this mapped to the keystrokes \a for Arabic and \e for English to quickly switch back and forth. (This mapping also switches to Arabic keyboard layout, as explained below.) This way, writing documents with mixed Latin/Arabic script becomes a process of quickly reorienting the entire text back and forth between these two modes of display. The idea is that all characters, regardless of how they are to appear in the final document, are displayed in their logical, rather than in their proper visual order. The reordering of the characters as appropriate for final display is postponed to when the document is compiled or converted to its final form, be it a .doc file, a .pdf, or in the rendering of a HTML file in a browser (as in the text you are now reading).

The drawback of this method of changing the entire text back and forth between LTR to RTL is that it is a bit disorienting. It is more difficult to navigate the text you are writing using visual cues, like headings and list, since these change shape with every switch in directionlity. The gains are however significant. Navigating, marking, copying, pasting and generally moving things around becomes completely streamlined, intuitive, and friction free. You can edit and change stuff as easily as you would piece of text containing only Latin script.

This is very useful. I am for example used from PC-standards to having the letter dhaal (ذ) on the §-key, at the top left of the keyboard, but in Vim’s Arabic layout it is on the `-key, next to the left shift. To change this I copied the original Arabic keymap file (I use MacVim so this file is locate in /Applications/MacVim.app/Contents/Resources/vim/runtime/keymap/arabic_utf-8.vim) to ~/.vim/keymap/ and changed its name to arabic-pc_utf-8.vim to differentiate it from the original file. The file name is arbitrary eccept that it must end with _utf-8.vim. In this new file I changed the input key that produces the letter dhāl from ` to § (line 54). I can now call this new modified keyboard layout with :set keymap=arabic-pc (using the first part of its file name). You could also change the original file, but this method is better since you can store the new file separately and make it more easy accessible for different Vim installations. My slightly modified Arabic keymap file can for instance be found here.

If you find yourself often having to switch back and forth between English (or some other language that uses Latin script) and Arabic, it is a good idea to map a function that switches to RTL directionality and the Arabic keyboard layout and back again. I have this set to \a for Arabic and \e for English using the code below (adapted from my vimrc).

Alternatively, and much simpler, you can use :set arabic to change to RTL and the default Arabic keyboard layout (see :h arabic).