I’ve recently been toying with different ways of visually representing the ten Standard Arabic verb forms. The traditional way of using the root fʿl (فعل) as a pattern is nice enough, but it does not provide clear visual cues to differentiate between the pattern and the root. What you see is whole words, not roots and patterns. This is something I have tried to amend in the document below in which the three root consonants are represented by empty squares. With the table in this format it is possible see the structure of the verb form at a glance without having to untangle it from root consonants. Or at least this is the intention. 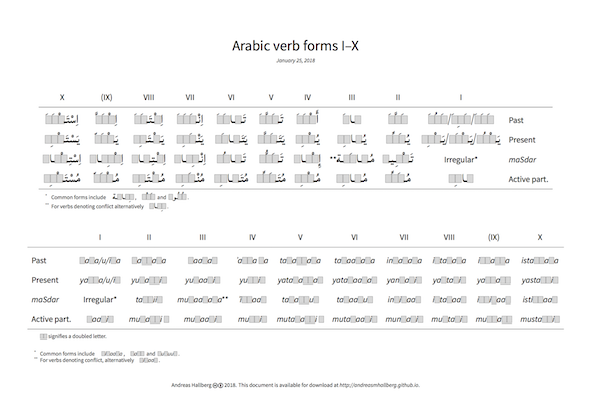 To my knowledge no one has presented the forms in this manner before. There are probably two reasons for this. The first is that is tricky to get the vowels typeset correctly when they are not used with actual letters. I had to revert to some LaTex black magic to get it done. The second reason is that the connections between the letters (e.g. the infix ـتـ in form VIII) will be incorrect for some roots, which might be upsetting to some. I believe this is a pedagogical non-issue since students at the level where this table is appropriate will have already mastered the Arabic script.

A positive side effect of this form of presentation is that students can physically ‘fill in the blanks’ with roots to test them in different forms and then pronounce them. This could be a good way to train what will sooner or later have to be an automated skill, the generation of words by combining roots and patterns in the ten forms. It is here the incorrect letters connections come into play, but gain, this will probably not be a problem in practice.

The document provides the entire table twice: in Arabic script and in Al-Kitaab/Ryding (2005) type transcription. Most likely the table with the Arabic script is best suited for students at the level where this table is introduced. The table in transcription is provided for students who might find the linear order of vowels in the Latin script more revealing of the verb forms.

The fonts used are the free-to-use Source Sans Pro and Lateef. Source Sans comes in different weights (thicknesses) which comes in handy when you want to match it with a specific Arabic typeface. I generally prefer the Light and ExtaLight weights but the Regular is used here to match the Arabic Lateef which is a typical naskh print typeface and thus quite heavy.